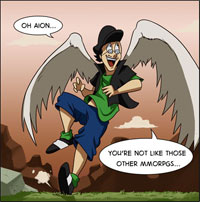 It is that time of the week again. We followed what other fansites were writing and picked out the best articles for you to browse through (while waiting for queues would go here but there aren’t that many left it seems?).

First off, Nicki Faulk let us know that she has put up a Fanlisting site for Aion. If you’re not familiar with the concept of fanlistings, a fanlisting is a website created by a fan of a particular subject, with the aim gathering together with and listing other fans of that particular subject. The actual concept has probably been around for a long time but the term ‘fanlisting’ as a one-word noun was first used when Janine Mischor created The Fanlistings Network in 2000 (http://thefanlistings.org/). So go over to nickifaulk.com/arieluma/ and become listed as a fan of Aion. I think NCSoft should make her site an official Fanlisting site of Aion.

Flying Bishounen released another great blog post discussing rangers and how you should equip/enchant them. Just a great continuation of their Sorcery series (of which Sorcery V is the latest).

I’ve been leveling my gathering skills in order to finish some of the quests for our Quest database and noticed that you can’t get over skill 99 in gathering by just harvesting stuff. When looking for an answer to why, I came across Spooner’s In depth look at Aion Professions at spooncraft.com (I actually follow the guy on Twitter), so I must recommend it for Crafting newbies like me.

There’s also a great blog post on AionExperience about little known things you can do in Aion – like linking items in your Private Store ad. To read how click z0r here z0r.

Gg-guys.com released an Aion related webcomic in their familiar style (I must say I agree with the comic completely). The image at the top is a small excerpt from it so go over to their site and read it.

That’s all for this week folks – hope you are enjoying your Sunday.

This entry was posted in news and tagged community, news. Bookmark the permalink.