You have probably came across several discussions about Cursed Gargoyle Fragments and their affect on the Fire Temple loot. Aion Lab decided to test this issue by killing Kromede 1000 times with and without the cursed item in the inventory. The results are:

Do Cursed Gargoyle Fragments in your inventory affect the loot in the Fire Temple? 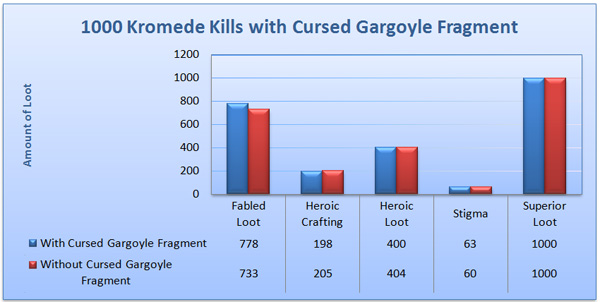 Do Cursed Lich Bones in your inventory affect the loot in Adma Stronghold?

While looking to see if cursed items affect loot, we also researched the Cursed Lich Bones and their effect on loot from Adma Stronghold. Here are the results after we killed Lannok 1000 times with and without Cursed Lich Bones in our inventory!

Test results almost identical to what we saw with Cursed Gargoyle Fragements in Fire Temple! Cursed Lich Bones in your party’s inventory do NOT affect the loot from Adma Stronghold!

Do loot rates change based on character level?

Xenoheart of Zikel asks: “I have always been interested in seeing if loot rates changed based on your level? I know that if you are greater than plus or minus 10 level difference, the loot straight up don’t[sic] happen. However the current most accepted hypothesis is that loot tables increase as you approach the level of the mob. For example if you are lvl 45 and the mob is level 45 you have the highest possible loot table. If you are lvl 44 or 46 it is slightly lower, 43, and 47 even lower, and so forth till the 10 level difference. Another theory is that this decrease only happens for being levels above the mob, not below.” 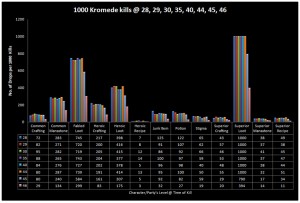 
This was a topic that we looked into as we were running our tests on poor Kromede! Killed her at various levels, and as you can see in the chart below, we see a SEVERE DECREASE in drop rates when characters 8 levels above Kromede (remember: Kromede is lvl 37) defeat her. The frequency of item drops decreases even further when 9 levels higher than the mob, and ceases entirely when the level difference is 10 or greater!