The Abyss is a region of Atreia located between Elysea and Asmodae. This area is reserved for higher level characters and end-game purposes because of highly desirable items and rare resources. It is an unpredictable area, with new challenges and opportunities for victory. The Abyss also offers the best place to gain experience, since the creatures provide a greater bonus to the advancement of player characters than those found in other areas. 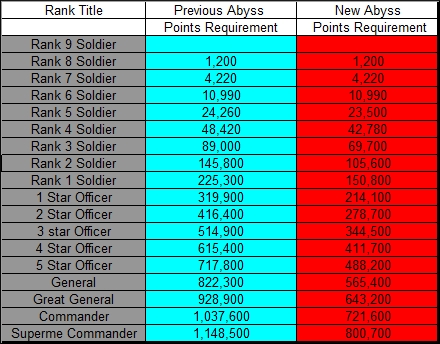 * Increases your Abyss Rank
* Increases your Legion Contribution Points (if you are a member of a legion)
* Allows you to purchase and wield powerful Abyss Weapons and Armors.

During the Third Closed Beta, the following information was released:

To access the Abyss, you need to complete a mission that is automatically given at level 25. After completing the access mission for the Abyss, use the “Abyss Gates” located in: Elyos at Verteron and Eltenen, Asmodian at Altgard and Morheim, Fortress Sky: Verteron, Altgard, Morheim, Eltnen: Fortress Underground (Under the elevator)

This entry was posted in guide and tagged Abyss Points, Guides. Bookmark the permalink.