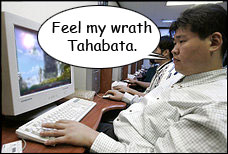 It is being reported by Incgamers.com that over 17% of Korean internet cafe players spend their time playing Aion. This makes it the most played game in Korea, considering that internet cafes / game rooms are a predominant place for playing games. The source of this information is the Google translation of this Korean web site (it’s a Starcraft 2 fansite). Interestingly enough – Starcraft – yes, the RTS from 1998 – is placed 3rd and World of Warcraft is number 5 on the list with 5.31% share.

One thing you should know about South Korean players according to the Washington Post:

An estimated 2.4 percent of the population from 9 to 39 are believed to be suffering from game addiction, according to a government-funded survey. Another 10.2 percent were found to be “borderline cases” at risk of addiction — defined as an obsession with playing electronic games to the point of sleep deprivation, disruption of daily life and a loosening grip on reality.