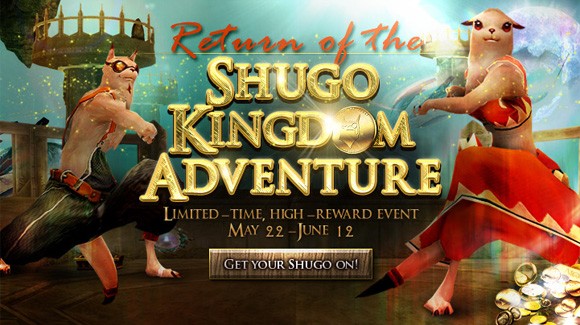 Shugo Kingdom Adventure is a limited-time instance which takes place deep in the Imperial Tomb. Starting May 22nd, Daevas who’ve reached level 50 will be able to participate in the Shugo Kingdom event and search for special treasure chests.

While inside, you will be transformed into a Shugo and your gear and stats are not important for the battle. You’ll also receive special abilities only available inside the instance. The instance requires 2-3 men, level 51-60, and it resets daily at 9AM. The goal is to protect your towers long enough to lure out the bosses of each stage and defeat them. This will get you the keys and entry passes you need to enter the various treasure vaults. Losing a stage will not lose you the instance, but it will prevent you from earning the keys you need to unlock the reward chests at the end!


Shugo Imperial Tomb is made up of 3 stages, and at the end of Stage 3, you will have the opportunity to use your Tags to enter special treasure rooms with normal and special treasure chests. During the fight, you will gain keys from the bosses, but you can also purchase the keys on the Black Cloud Marketplace. You need 1 key to open normal chests and 3 to open the special chests. Normal keys will disappear once you leave the instance, while the purchased keys remain in your inventory until used and can be traded to other players.

In order to enter the treasure rooms, you will need one of three different Tags; Gold, Silver or Bronze. Map pieces can be found on the various bosses that appear in the stages. If you find all 4 pieces, you can combine them to earn a random Tag.You can also earn Tags by defeating the final boss of Stage 3. The Tag you earn determines the treasure room you can enter, but remember that you will still need keys to open the boxes inside, so you may wish to save your Golden Tags for runs that have earned you a high amount of keys.

If you think about rewards, we can assure you that you can expect top prizes like: Statted, Eternal Wings, Stormwing weapons and armor, Mithril Medals, valuable Abyss Relics or even a time-limited pet that can give L60 Composite Manastones.

More information about skills and rewards can be found on the official Aion promo page.