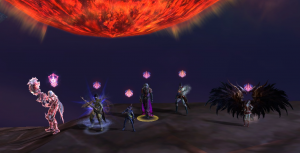 Ariel server hosts a group of brave Asmodians that dared enter Lord Tahabata Pyrelord’s lair and challenge its rule over Dark Poeta. After two weeks of trying and wiping and trying again they fell the beast. Tahabata is famous for having he best loot table in the game (click here to see the Eternal quality gear she drops) and to even see her you need to finish Dark Poeta with the best grade. The kill is the first publicly announced kill and, if not contested, is the first kill on the NA/EU servers. The group consisted of:
Ranger Tank: Forgiven
DPS Ranger: Dae
Templar: Krull
Cleric: Decoy
Chanter: Qloe
Sorc: Astro

You can see the video of the kill below. Notice the spawn in the last 1%? It sure was an epic fight with an epic ending! Congrats to the heroes and may the loot Gods smile upon you.

This entry was posted in news, video and tagged boss, kill, Tahabata. Bookmark the permalink.